As of April 2022, what percentage of 529 users, non-529 savers, savers and non-savers earn certain levels of household income?

The “529 Industry Analysis 2022” is ISS Market Intelligence’s 26th study on 529 plans. Its purpose is two-fold:
• To provide the education savings industry participants with a qualitative and quantitative analysis of key trends that we believe will drive industry growth over the next five years
• To outline actionable steps to help product providers and distributors restructure their legislative, product, marketing and distribution initiatives to better align with the demands of investors, families, employers and advisers and, therefore, to improve the growth rates of both their plans and the industry

The primary goal of this study is to analyze the decision-making and product-selection processes of individuals who were, at the time of our survey, either 529 users, non-529 college savers or non-college savers.

For ISS Market Intelligence’s 529 Industry Analysis 2022, we partnered with a premier business-to-business (B2B) and business-to-consumer (B2C) panel provider and data-collection services company to conduct a proprietary survey of 1,011 consumers in April 2022. This nationally representative sample included U.S. household decision-makers between the ages of 25 and 82, with annual incomes of US$25,000 or more and who were either parents or legal guardians of a child or children under the age of 18.

The survey utilized a choice model method that mapped the target market into three categories: 529 users, non-529 college savers and non-savers. This approach provides firms with strategies on how to convert non-college savers to college savers; college savers to 529 users; and 529 users to 529 “power users”. 529 power users are defined as those savers who are fully funding their accounts to their annual maximum contribution limits, or those who are leveraging multiple sources of contributions, such as friends, family, employers or credit-card rewards programs. Longitudinal analyses are reported for certain data points, as ISS Market Intelligence has conducted similar proprietary consumer surveys with enhancements based on feedback in 2012, 2013, 2014, 2015, 2016, 2017, 2018, 2019, 2020, and 2021, and has partnered with the same firm to poll consumers. While there were not any changes in the demographics of survey-takers in 2022, one change in the 2016 demographics was to include those with annual incomes of $25,000 or more, as opposed to $30,000 or more, to improve sample alignment with the U.S. Census. While this broadened out the target market of the survey-takers, we do not project material changes in results due to the inclusion of the category. Therefore, year-over-year trend reporting will be included in charts and tables, and in the written analyses.

ISS Market Intelligence also regularly conducts primary research in the form of interviews and meetings with industry executives to understand the latest trends in legislative, product development, marketing and distribution of 529 plans and the education financial planning industry. 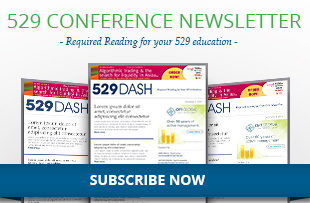